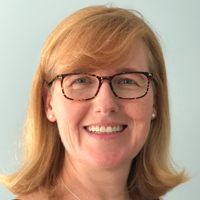 Jennifer Hagwood is a Project Manager, Talent at Comcast.

Jennifer is a Project Manager of Military and Veteran Initiatives for Comcast’s Northeast Division.  She leads programs and initiatives including hiring and supporting veterans, National Guard and Reserve members and military spouses.  She also leads and supports other business process and systems projects for the Division.  Relatively new to Comcast and WICT, she is passionate about the military community and is an active member of Comcast’s Veterans Network, Women’s Network, and her local chapter of Team Red, White and Blue (Team RWB), a veteran service organization.  She is excited to join the WICT Board as membership chair.

Before joining Comcast in 2017, Jennifer worked as a project manager at Zagster, a bike share company in Cambridge, MA and at Cisco Systems, in San Jose, CA.  She led and managed projects from enterprise-wide systems implementations to a nation-wide bike-share upgrade project.  Most notably she implemented a new ordering process and system for Cisco’s North American distribution partners that increased distributor profitability and streamlined distribution sales.

Jennifer is a graduate of the United States Military Academy at West Point and served six years as an officer in the U.S. Army.  In addition to her Bachelor of Science degree in Environmental Engineering, she holds a Master of Business Administration from University of Texas at Austin.

She is a New Hampshire native and resides in Greenland, NH.  In her free time, Jenn enjoys running marathons, baking gluten free things and spending time with her husband and two daughters.